After our TechDebate in London earlier this year, I had the opportunity to have a follow-up conversation with one of the panelists, Dominique Guinard who is the founder and CTO of EVRYTHNG.

We discussed his views on the direction of the IOT.  To attend future debates register at techdebates.org.  We’re always on the look-out for debaters – if you have something to say, let us know: https://techdebates.sphereinc.com/debater-registration

Dominique Guinard is the founder and CTO of EVRYTHNG, an IoT SaaS platform for consumer products, managing billions of unique digital identities in the cloud to help brands gain visibility into supply chains and engage directly with their customers. In April 2019, Dom participated in a TechDebates.org forum in London where the panel discussed opportunities based on the intersection of the digital and physical realms. Dom and I were able to explore the topic a bit further in a follow-up discussion.

Could you briefly describe the Internet of Things (IoT) solutions EVRYTHNG is providing to the market?

DOMINIQUE GUINARD: EVRYTHNG utilizes the IoT to activate products with unique digital identities, authenticate products as they move through the supply chain, and increase customer engagement with the products.

People tend to forget that this is where the IoT comes from. The term IoT was introduced by the MIT Auto-ID Labs talking to Procter and Gamble in 1999. Their vision was a world where all their items would be tagged with RFID tags, forming the Internet of Things. EVRYTHNG has utilized this original vision to help product manufacturers secure their supply chains and to better serve customers.

Do you have a couple of examples of interesting IoT applications that are providing value to consumers? 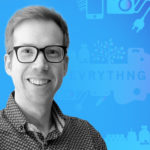 DOM: EVRYTHNG just launched an application for Mowi, a Norwegian salmon company, that allows them to trace their salmon from the beginning to the end of their supply chain. There have been a number of scandals and safety concerns within the food industry (e.g., the e-coli outbreak or the presence of chemicals in fish farming), so Mowi’s goal was to provide more transparency to their consumers. Now each package of salmon has a unique identity in the form of a QR code that enables traceability across their entire supply chain. It is also the industry’s first mass-scale application of the new GS1 Digital Link standard that has upgraded the traditional barcode to connect every product to the web.

The customer can track the journey of the salmon they have in their hands—not just the date. The customer can learn where the salmon originated, where it was caught, the kind of food it was fed, how it was raised, and other details of interest.

I’ll offer another example. I have a device that I always carry with me. It’s a long, white box that monitors the pollution around me all the time. What’s interesting about this device is that it harvests energy from surrounding electromagnetic forces. So basically, it harvests energy from mobile phones, antennas, radio waves, and other transmitting devices.

It uses the captured energy to monitor the surrounding air quality every five minutes. I was able to hack into the data and use it to find the best ways to cycle to work—routes that are the least plagued by air pollution. To me, that was really eye-opening, because it’s an example of instrumentation of the real world that wouldn’t be possible without the IoT, and it is extremely useful. Reducing my exposure to air pollution might have saved a few years of my life.

Are there areas where technology advancement is necessary to further facilitate the development of the IoT?

DOM: I might be a bit biased because I’m very active in the world of standardization, but I do see standardization as a meaningful bottleneck. While the IoT is a bit more mature than some emerging technologies, probably in its teenage years, the maturation and growth of the IoT has been all over the place. But this is the nature of developing technologies.

Because there is a lack of interoperability, the IoT doesn’t exist in its truest form. We’re basically creating intranets of things—small islands of things that are not really communicating seamlessly. Standardization is happening, but it’s happening slowly.

On a purely technical level, I think battery life and energy management are issues still very much in need of development. Especially when you want devices to move beyond tagging into sensing, you need smart ways of powering them. We can’t rely on batteries alone because they’re very heavy and unfriendly to the environment.

As the Internet of Things continues to develop, what ethical and societal challenges are we facing?

DOM: The consequence of instrumenting the world is that the world sees and records everything, creating substantial privacy challenges. Tracking is necessary for the operation of mobile devices like cell phones, so we can’t simply turn tracking off.

I think most of us have gotten used to the fact that our mobile device tracks and records our movement. However, much of IoT data capture is the background, woven into the fabric of our everyday lives, so it becomes hard to be explicit about what data are being captured and shared.

That said, there are people working on access challenges. Earlier this year, a few satellites were launched that should bring the Internet to the regions and individuals who do not currently have access.

Where do you think the IoT will take us within the next 5–10 years?

DOM: I think we will see a lot of new IoT-related technology. For instance, 5G is being deployed as we speak. A big chunk of the 5G network is meant for IoT devices, so this means we will be able to start thinking seriously about the worldwide implementation of various use cases. In the next 10 years or so, we’ll see instrumentation of basically everything that can be instrumented while delivering a positive ROI.

The IoT is starting to become more formalized with regulations and standards. Up until now, it has really been the Wild West and there have been no standards for IoT privacy and a lot of aspects of the IoT are insecure. I think we will see things maturing as we deploy large-scale use cases.

Our company, Sphere Software (https://sphereinc.com), is a sponsor and organizer of Techdebates.org and also finds great value in these follow-up discussions with industry experts. Sphere is a technology consulting and solutions company. Everything we do is designed to accelerate your business, remove technical constraints and eliminate staffing bottlenecks.